Prosentient Systems has been engaged to provide a strategy and plan for the implementation and local hosting, user training and ongoing support of the system.

In the initial mission to Myanmar, the library's software and hardware requirements were reviewed, hardware specified and the initial DSpace implementation and configuration completed. Library staff were also given hands on training and local technical service providers interviewed for the provision of in-country support.

Early in the implementation it became apparent that the language localisation of DSpace would be complicated by the lack of a generally accepted standards for encoding the Burmese character set. Rather than develop a Burmese character keyboard, developers have generally used English–US keyboards augmented with shortcuts to generate Burmese characters. Several different encoding methods and associated keystroke practices are in common use, even within the parliament itself.

The most commonly used keyboard convention is the ZawgyiOne keyboard set and font. While Myanmar3 is gaining acceptance (through Google) as a more acceptable Unicode character representation, a decision to standardise is outside the scope of this project. Prosentient therefore undertook technical work to develop transcoding scripts that allow data entry in both Myanmar3 and ZawgyiOne formats.

A followup visit will soon deliver further training for repository administrators and a technical workshop for IT staff in which the production servers will be set up and commissioned. Myanmar will then join parliamentary and government libraries in Solomon Islands, Northern Territory, Canberra and New South Wales in utilising DSpace open source software for managing their digital collections and making them available to their constituencies over the Web. 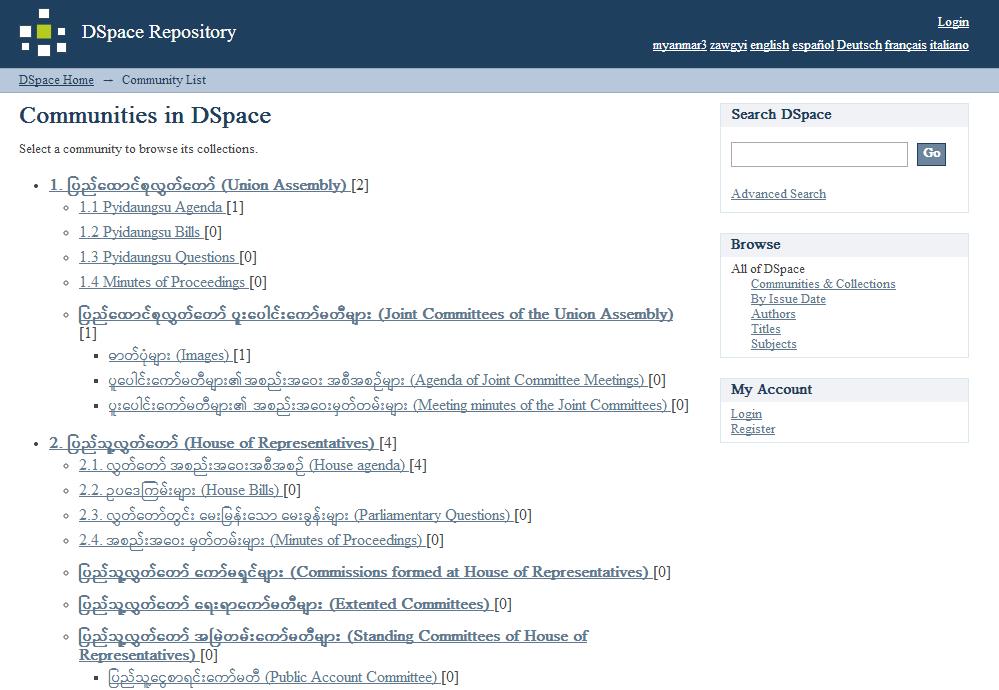