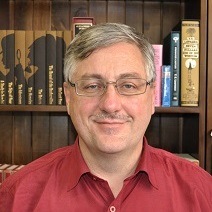 As the CEO and Founder of Prosentient Systems, Dr Edmund Balnaves brings to the business over  two decades of industry experience in information systems, with a focus on the development of  effective solutions for information intensive environments. Having worked with Unix, Linux and  Windows architectures at a system administrative level, Edmund's skill-set covers a broad range of  architectures and development environments. Dr Balnaves is actively engaged in research and has  an strong publication record in the area of web and library services. Dr Balnaves is a member of ALIA (Australian Library Information Association) (and director of ALIA 2013-4) and of the IEEE. He is a standing committee member of the Information Technology Section of IFLA (International Federation of Library Associations)since 2005, and chair 2013-2015.

Having worked with both Unix, Linux and Windows architectures at a System Administrative level, Edmund's skill-set covers a broad range of architectures and development environments.

University of Sydney
Lecturing at University of Sydney as part of ongoing research into Content Management systems and the use of information systems in the Arts and Humanities. Designed and presented the unit of study "Arts Informatics Systems", and wrote the book "Information Systems in the Arts and Humanities" as part of the course. Prepared exams, delivered lectures and supervised tutors for course unit of study delivery. Presented seminars in the area of Content Management. Arts Informatics Systems was selected in 2001 for the Vice Chancellors Showcase. Also completed doctoral research.

University Cooperative Bookshop Ltd
In mid-April 1994 Dr Balnaves gained the position of MIS Manager for the University Cooperative Bookshop Ltd. At the time Dr Balnaves joined, the organisation had no IS strategic plan, and had systems that were both antiquated and entirely undocumented. The operating base was very close to its capacity limit and the IS department, as part of the accounts department, was severely understaffed. As part of a major realignment of the business function, Dr Balnaves put forward a strategic plan for the development of IS functions that was accepted by the Board. The MIS department was restructured with direct reporting to the CEO. The realignment included the formal establishment of Help Desk functions, proper establishment of system documentation and operational standards, development of a migration plan for existing systems and a strategic plan for development of store-based systems. While at the Co-op Dr Balnaves was responsible for implementation of one of the earliest .com.au ecommerce systems in Australia.

Watson & Crane
In January 1993, Dr Balnaves took up the position of IS Development Manager at Watson & Crane. In addition to the line management of Development staff, the position involved the selection, specification and development of major business systems, and the management of the roll-out and support of a major Point Of Sale implementation. The company began a fundamental restructuring of its business in 1992, including a re-evaluation of requirements for all its Information Systems. Arising from this review was the selection of the product TOLAS for both Point Of Sale and integrated Inventory and Financial control within the business. My responsibility, leading a small development team, was the project management of this implementation and its integration with other business systems.

Master of Business Administration
In 1992 Dr Balnaves undertook an intense 1 year MBA at the Northern Territory University, located in Darwin, having won a Commonwealth Scholarship award (1 of only 5 such post-graduate business scholarships offered nationally). The programme offered a comprehensive business programme with an International management focus, covering Human Resource Management, Financial and Accounting systems, Strategic Planning, Team Building and Marketing techniques. On completion of the course Dr Balnaves was the winner of the Australian Institute of Management award for the course and co-winner of the Royal Brunei Balnaves best student award.

Coles Myer
In August 1988 Dr Balnaves joined the IS department of Liquorland, a division of Coles Myer, as IS Development Manager. At the time Dr Balnaves joined, the Department comprised two IS staff, and the business was largely dependant on Coles Myer Corporate computing systems for Accounting or Merchandise support. In the three years that followed Dr Balnaves was responsible for the selection, enhancement and development of a range of systems to support the Business Unit. This also involved building an IS Development team of 6 analyst/programmers, and the supervision of contractors for a range of system management and development projects.
In 1988 Dr Balnaves participated in the development of a strategic plan for the Business Unit, in conjunction with the GM IS. In 1989 Dr Balnaves oversaw the acquisition and installation of a VAX 3400 at the Liquorland Head Office for Office Automation (using ALLIN1) and small systems development (using Powerhouse). The introduction of a 4GL had a significant impact on the ability of the Department to deliver effective systems in a short timeframe. In early 1989, Liquorland and other divisions of Coles Myer became fully responsible for their own financial systems. As a result, Dr Balnaves oversaw the implementation on VAX systems of McCormack & Dodge Accounting and Human Resources systems (AP-PLUS and HR:M).
From 1991, Dr Balnaves led the evaluation and implementation of new systems for Price Management, Continuous Inventory and Promotional Management, and participated in the tendering and evaluation of replacement Point Of Sale equipment for the 285 Liquorland stores linking via X.25 to host-based ICL Unix SVR4 DRS/6000 systems.

Australian Broadcasting Corporation
In the position of ABC Research Computer Manager Dr Balnaves was responsible for the development and implementation of a graphically-based Executive Information Systems: the McNair Anderson Television & Radio Ratings Information System. The project involved the development of an online database for statistical analysis and reporting with business graphics on the Ratings results. Dr Balnaves was responsible for all stages of development, implementation and post-implementation training. The project was completed (in time and on budget) by April 1988. On completion of this project Dr Balnaves transferred to the Television division to manage the development of an Equipment Maintenance and reporting system (EMPIRE) in Powerhouse.